Distance from Koror: A 2 to 3 minute boat ride from most Dive Shops in Koror.

Visibility: Weather dependent; close proximity to the reef raises sediment with wave action. Like all wreck dives, it is recommended to maintain neutral buoyancy while visiting the wreck to avoid stirring up silt. Visibility is best during incoming tide.

Level of Diving Experience: Intermediate with Wreck Diver certificate preferred. This dive requires careful planning; the attractions on this wreck may cause distractions.

Diving Depth Summary: The ship is resting upright, at the base of a hill, with bow lower than the stern. The bow, pointing southwest, is in 110 feet (35 meters) and the stern is in 45 feet (15 meters). 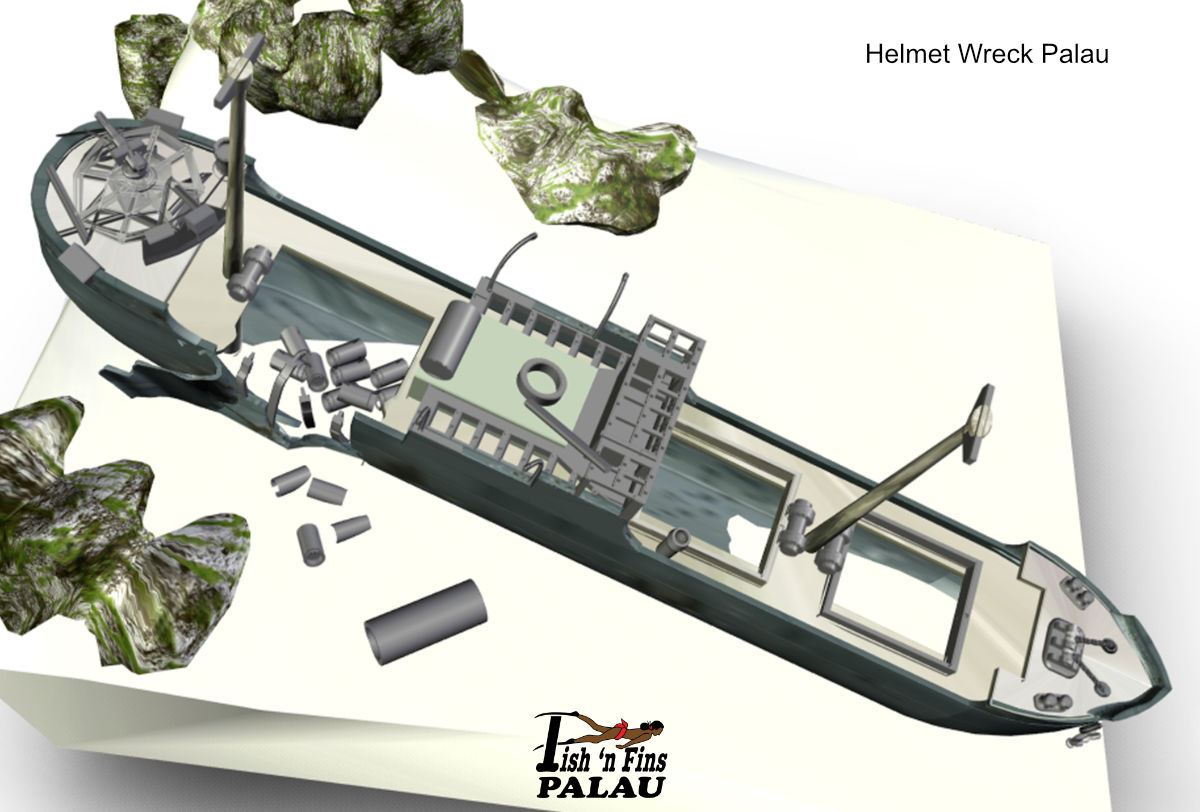 The dive boat will tie off to the stern of the ship. Drop down the mooring line to the deck of the ship. Use the twisted and deteriorating guardrail surrounding the aft deck as a guide as you swim down towards the bow. The first sight, that will immediately attract the most attention, is a round aft gun platform. The gun barrel is pointing to port amid the mangled steel of the collapsed gun mount (see video). There are two depth charge release boxes located on each side of the platform; their lethal charges are still inside. At this point, you may wish to look at the propeller. The prop is almost completely covered by bottom silt. The rectangular rudder reveals the fact that no damage occurred to this part of the wreck. Decades of underwater marine growth cover the hull and the deck with thick layers of corals. On the aft starboard side of the ship a massive explosion tore open the hull revealing the ribs of the ship and scattering drum-like depth charges onto the sea floor (see video). The exposed main cargo hold reveals stacks of depth charges neatly arranged on port side and, due to a massive explosion, scattered around on the starboard side. Under the port upper deck, stacks of helmets, now cemented together by decades of underwater corrosion, can be found (see photo). Between piles of rifles and ammunition, gas masks stare out at divers from the sediment. The amidships superstructure is a box like. Along the port side you will come to the engine room's skylights and a pair of engine room ventilators that tower upward. The ship's main stack, now sitting on the bottom on the starboard side, left a gaping hole in the middle of the deck. There is an inner passageway, leading to several small rooms and a catwalk above the engine room. The wooden roof to the bridge is gone allowing easy to enter the wheelhouse. The forward holds are penetrable through two (2) large hatches on both sides of the forward light mast. No partition between the two holds exists so you can swim right through. The forward hold is half full of silt, but among the web of electrical wires, electronic equipment and ceramic jars are three (3), clearly visible, huge radial aircraft engines. On the raised bow you can find a two-headed anchor winch (very unusual) with anchor chains extending into the chain holds and to the anchors. Inside the forecastle you can find brass lanterns and an old taffrail log (a speed-measuring device). (see photo). There are excellent photo opportunities on all areas of this wreck.

Marine life: Many species of tropical fish and large selection of invertebrates can be found here.

Diving: It is an excellent and rewarding night dive. On this ship, as with all ship and plane wrecks in Palau waters, live ammunition can be found. A word of caution: DO NOT PICK UP ANY AMMUNITION!!!!! Due to the age of the bullets, bombs and mortars, etc. these pieces of history are very unstable and can explode.

Fascinating Facts: The true name of this ship is unknown; she was not documented in any of the navy archives.Probably the ship was confiscated in Southeast Asia during the war. Wreck hunter Dan E. Bailey discovered the ship, on January 18, 1990. Today the ship is called Helmet Wreck, The Depth Charge Wreck Or X Wreck.