Distance from Koror: A five (5) minute boat ride from most dive shops in Koror.

Visibility: Visibility can vary from 100 feet to 20 feet (33 to 7 meters). Divers almost always find better visibility on the forward half of the wreck.

Level of Diving Experience: Advanced with deep and wreck diving experience is recommended. 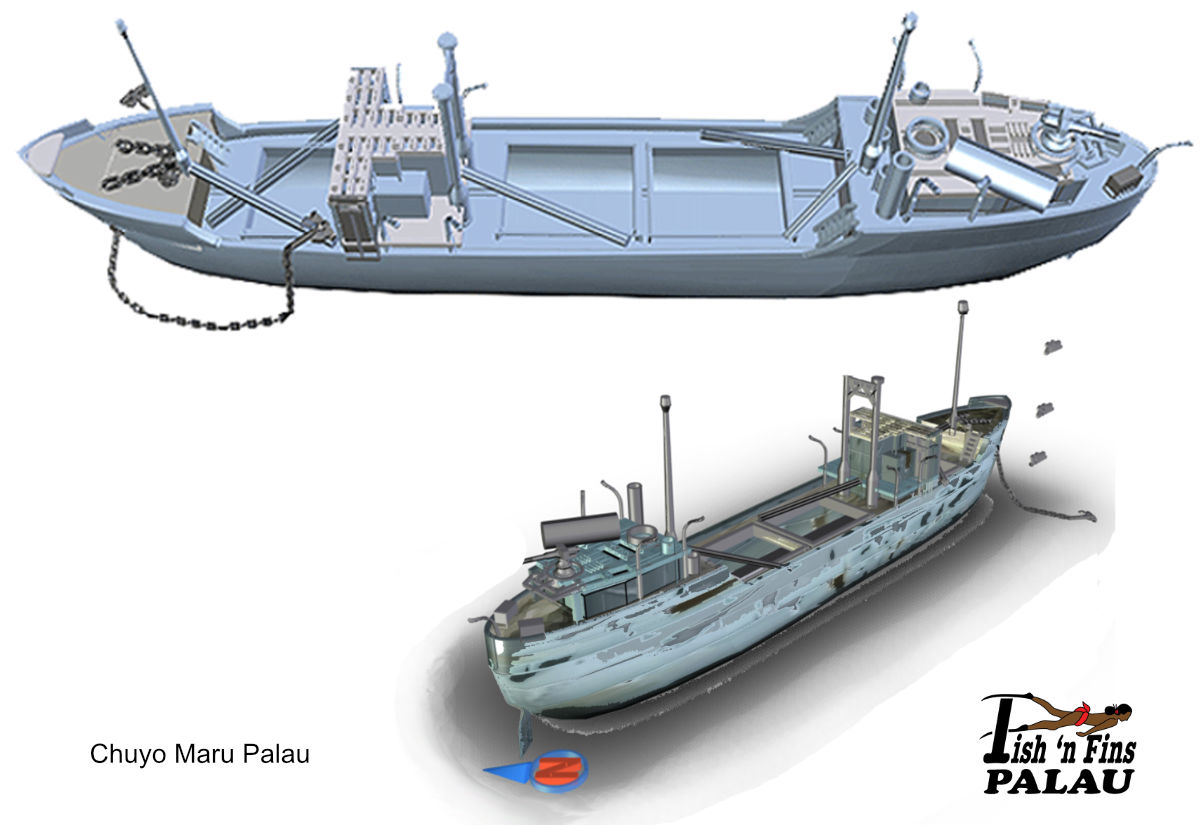 This medium sized costal freighter was bombed during Operation DESCECRATE ONE on March 30-31; she sank on April 1,1944. The Chuyo Maru is one of the most popular wrecks in Palau. Nicknamed Lion Fish Wreck for the large number of lionfish that reside in and on this ship. The Chuyo Maru has no marker buoy. The dive guide will locate the wreck and use a lead weighted anchor to tie off the boat. Usually the dive begins at the bow section of the ship. The bow is raised above main deck with a tall loading tower in the middle. On top of the forecastle is a large double-headed anchor winch and coils of cable now encrusted with colorful corals. On the port side of the deck just prior to reaching the bridge are two (2) anchors. In the early 1990s a fishing boat unknowingly anchored above the Chuyo Maru, while lifting their anchor they snagged the Chuyo anchor. The chain from the fishing boat broke trying to lift both anchors. Both anchors can now be seen lying together on the deck. Square trussed loading beams from the forward mast extend aft toward the forward hold. The hold is empty. Swim aft toward the bridge. The bridge structures were burned during the bombing and have since disintegrated; remains of the brass compass and ship^s telegraph can still be seen. Swimming past the bridge, you will approach the main cargo holds. These holds are empty too, save your air and bottom time for further exploration. The engine room and boiler room is raised above the main boat deck. Preparation is needed in order to penetrate the engine room and the crew quarters. A single door on the starboard side leads to a catwalk and stairs that connect the deck to the engine room entrance. The engine room is relatively large but can turn into rusty -brown silt filled water very fast. Further aft, toward the stern past the engine room skylights are the stern gun, four (4) ammunition boxes and two (2) depth charge launchers both containing a depth charge. The stern gun is a standard 1.86 tons gun with short barrel with a maximum range of 17,388 feet (5300 meters). This type of gun was usually mounted on ships under 5000 tons.

Reef Formation: There are no coral formations around the wreck. The bottom is silt.

Marine life: The entire bow section is covered with hard corals, black corals (Antipathes sp.) and spiral corals. Look closely at these corals and you may find a large number of translucent shrimps living on them. Cock's Comb oysters and soft corals cover the rails and deck. An area that is especially rich with lionfish is just past the cargo aft holds. The usual abundance of colorful tropical fish can be found everywhere on the wreck.

Diving: On this ship, as well as with all ship and plane wrecks in Palau waters, live ammunition can be found. A word of caution: DO NOT PICK UP ANY AMMUNITION!!! Due to the age of the bullets, bombs and mortars, etc. these pieces of history are very unstable and can explode. Penetration dives are not recommended unless the diver is experienced and skilled. Due to the age of the ship and the silting conditions, penetration into this wreck is considered DANGEROUS.

Fascinating Facts: Although the exact location of this wreck was recorded, the wreck was not considered worth salvaging after the war. She was forgotten until April of 1989 when wreck hunters Francis Toribiong and Klaus Lindemann rediscovered her.