Currents: The currents at Peleliu Expressway are unpredictable and often change directions without notice. As rule of thumb, incoming tide will flow to the northeast; the outgoing tide flows to southwest creating what is called the 'expressway' effect. During full and new moon the currents are more severe and special care should be taken if this dive is attempted during this period. For more information regarding the tidal patterns of Palau, check Blue Corner tide and current section.

General Information: This dive is for experienced and advanced divers because of the ripping currents that can seemingly come out of nowhere and change direction without warning. When the current is running, Peleliu Express is considered the ultimate in drift dives, but this dive is not for everyone.

Reef Formation: The reef is a vertical wall that runs parallel to the southern most tip of Peleliu Island on the eastern side. The upper end of the wall consists of sandy-bottomed crevices and canyons. The wall drops from 20 to 120 feet (7 to 40 meters) and is covered with hard corals and rock rubble. At approximately 100 to 120 feet (33 to 40 meters) the reef forms a plateau before dropping off again thousands of feet. Toward the southern end of the wall is a large rock at 45 feet (15 meters); this marks the end of the Express and the beginning of Peleliu Corner.

Marine life: Peleliu Express is home to some of the largest fish concentrations in the world. The strong currents at this point attract many pelagic creatures. On this particular dive site, divers have had encounters with Blue Marlins and Sailfish, Whale Sharks (there are a few encounters every year), pods of Sperm Whales, Pilot Whales and Orcas. Sharks, barracuda, rays, turtles, giant groupers and Napoleon Wrasse will come very close to divers hooked on to the reef; providing many great photo and video opportunities. Other permanent and unique residents at the Expressway are large schools of Oriental Sweetlips, Palette Surgeonfish and very large Rainbow Runners. 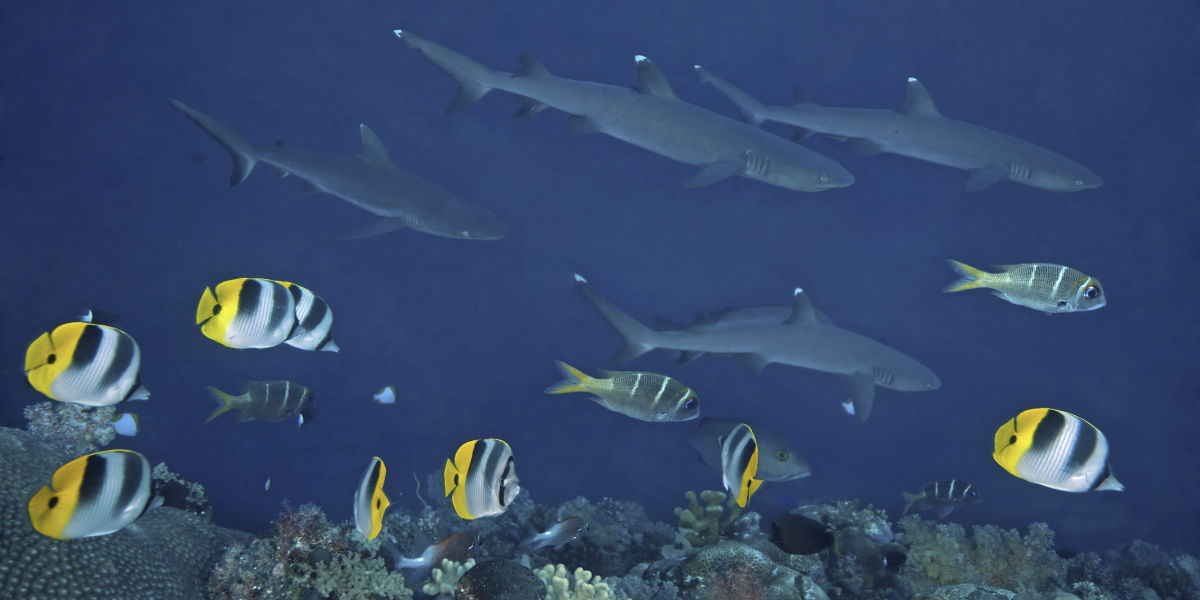 Diving: The boat will drop you in front of the sandy lagoon, east of the Japanese WWII Monument. Drop down between 20 and 30 feet (7 and 10 meters) to the top of the reef. Many canyons and crevices cut across the top of the reef. Drop over the edge of the reef and follow the wall to 75 to 85 (25 to 28 meters) keeping it on your right. If the outgoing current is strong, the diver will fly along the wall toward the corner. When the corner is reached the reef wall drops away to 90feet (30 m). Ascend to 45 or 60 feet (15 or 20 meters), hook on to a rock and watch the action along the corner. During strong currents it is possible that the diver can be caught in a down current. The down current can shoot the diver down and toward the end of the reef. If you are caught in this type of current, stay calm, swim away from the wall and ascent slowly. The only way to totally avoid this type of current is to stay above the plateau and not go all the way to the corner. It is a good practice to keep your Dive Guide in sight and be alert to any signs or signals that may be given. Important Notice: Safety Sausages are mandatory equipment on this dive.

Fascinating Facts: The reef hook is a truly a Palauan invention, it is a special device to keep your hands free and to prevent damage to the reef, while facing strong currents. On one end of an approximately 6 foot (2 meter) cord is a large fishhook (barbed end removed) and on the other end is a safety clip that attaches to your BCD. If you are a photographer a reef hook it is a must! Reef hooks are available at all dive shops in Palau.