Currents: The currents you may experience while diving the reefs of Peleliu can be the strongest in Palau. Diving at this site, due to the unpredictability and strength of the currents is considered difficult. Depth and direction of the current(s) must be monitored, by the diver, at all times.

General Information: Peleliu Corner is where the ocean currents, flowing around this island archipelago, converge making up some of the strongest currents you can experience as a diver. Safety Sausages are mandatory equipment for this dive.

Reef Formation: Peleliu Cut is part of a vertical wall, which runs along the western side of Peleliu Island, turns and extends to Peleliu Corner at the southern tip of the reef system. This section of the reef, which includes Peleliu Wall, is the deepest reef structure in Palau. The top of the reef is a plateau that gradually drops from 30 feet (10 m) in front of the WWII monument to 90 feet (30 m) where Peleliu Expressway and Peleliu Cut merge to create Peleliu Corner. 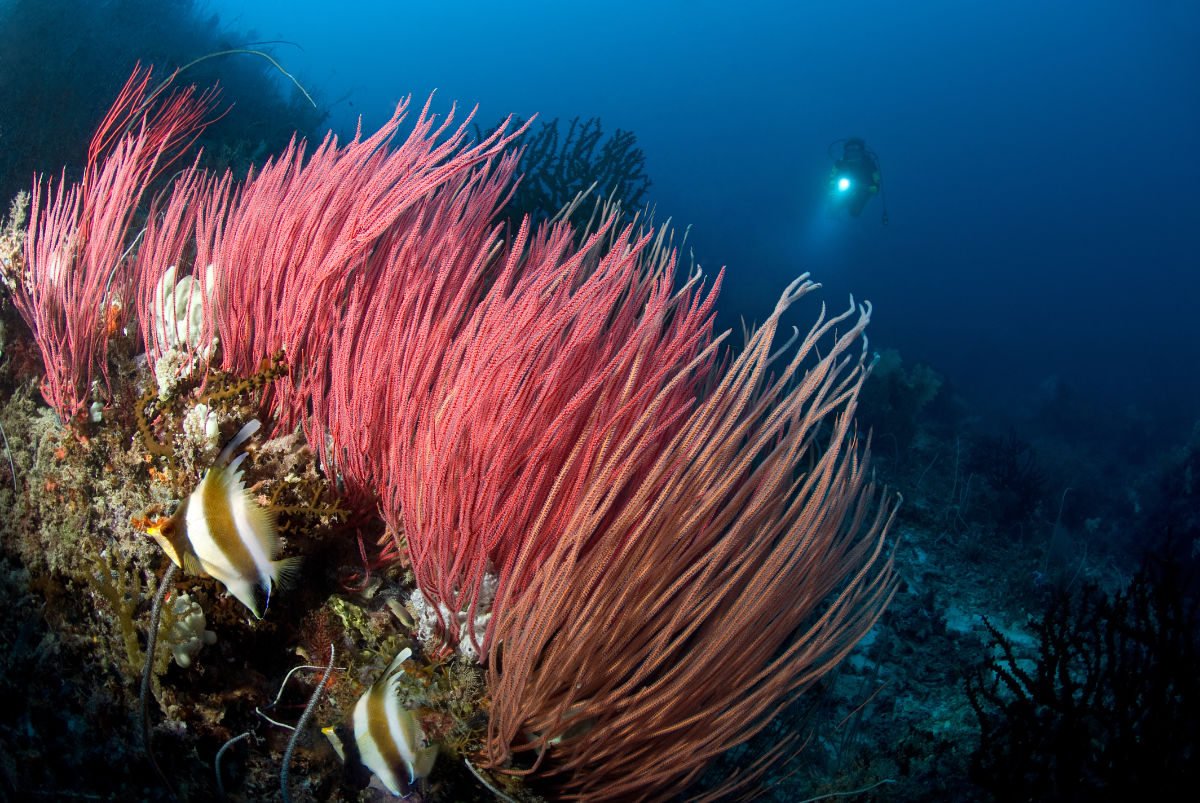 Diving: In normal current conditions this dive can only be done in one direction. The boat will drop you along Peleliu Wall, after the Dive Guide assesses the strength and direction of the current. Follow the wall down to 80 or 90 feet (25 or 30 m) keeping the wall to your left. You may encounter some counter currents along the wall as you approach the Peleliu Corner. When you reach the Corner, if the current is strong, stay deep. If you are too shallow you will not be able to hook on to the reef and eventually you will find yourself carried over the reef to Peleliu Expressway and the open ocean. If the current is mild, hook yourself to the top of the reef and enjoy the show. The Cut is a spectacular reef offering many hidden crevices and caves for you to explore as you swim toward Peleliu Corner. While swimming along the reef you will probably see many Gray Reef and White Tip sharks. When you reach the Corner you will see more sharks and providing that the conditions are just right, you will see some of the largest schools of surgeonfish, snappers and jacks in the world.When you are ready to leave the Corner watch your depth, the plateau gets deeper and deeper toward the south. The current will carry you over the top of the plateau to the Expressway on the eastern side of the reef. Stay at least 15 to 20 feet (5 to 7 meters) above the reef to avoid any down currents. If there is no current or very little it is possible to cut across the top of the plateau at 90 feet (30 m), but you must keep a close watch on your depth, air and bottom time! Keep your Dive Guide in sight as he /she will alert you to any changes in dive conditions. Once across the plateau, ascend slowly to perform your safety stop.

Fascinating Facts: The monument seen on the southern tip of Peleliu Island is a tribute, erected by the Japanese, to honor soldier on both sides of the war, who fought and gave their lives on this island. Today, Peleliu is a quiet island with a population of about 600 residents. Local guides offer a 1 to 2 hour guided tour of the island's historical WWII sites. The most famous guide is Tanzy Hesus. Tanzy knows all the facts about all the battles fought on Peleliu and he is the guardian of the local museum. The tour is a great way to spend time between dives; do not miss the opportunity.