Diving Palau isn’t complete without diving the world-famous dive site Blue Corner. A dive ranking amongst the best in the world.

But what makes this dive site so special?

Due to its location and formation Blue Corner very often gets strong currents - currents that attract lots of schooling fish feeding on smaller organisms traveling with the current. This attracts big predators which are looking for schooling fish. On most days you’ll jump in the water, go down, drift towards the corner, and have hundreds of fish and sharks around you as you make your way to the plateau.

Once hooked in on the plateau taking cover from the current you can just “hang” and enjoy the scenery - the sheer richness of sea-life surrounding you.

Many divers just visit Palau, despite the many attractions, for this fantastic and unique dive site. 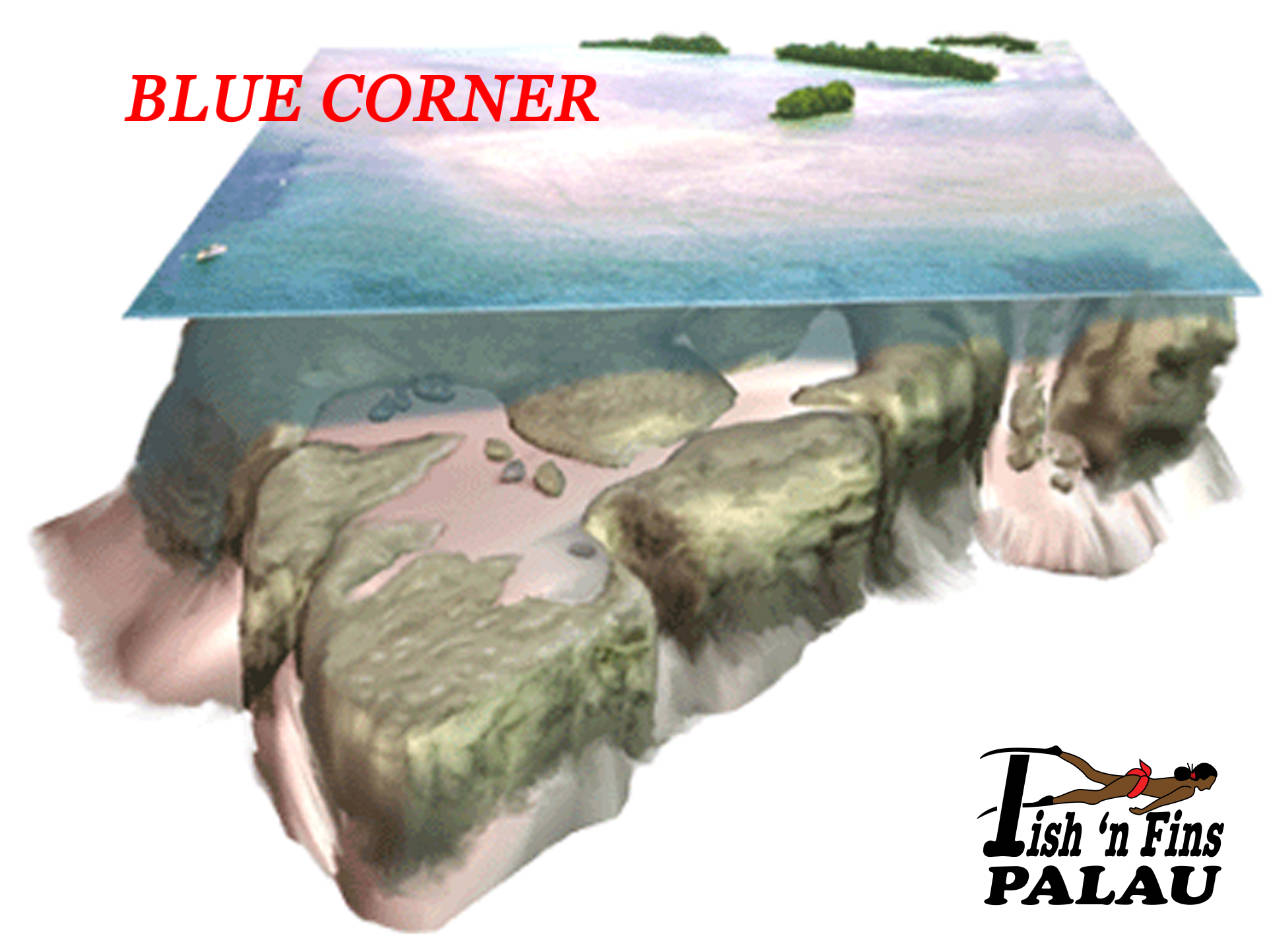 Southwest reefs of the Palau Islands. Blue Corner is at the northwest end of Ngemelis Island.

Visibility - On Incoming tide: 90+ feet (30+ meters). Outgoing tide: 45 to 60 feet (15 to 20 meters). Note: Some guides believe best visibility is brought in by an incoming tide with a so-called "outgoing current", a current that moves from Blue Holes to the Corner.

Important Notice: the currents at Blue Corner can change within seconds. Your dive guide is the best person to check with regarding the required level of experience.

80 to 90 feet (25 to 30 meters): a large variety of smaller gorgonian and lush formation of purple soft corals. 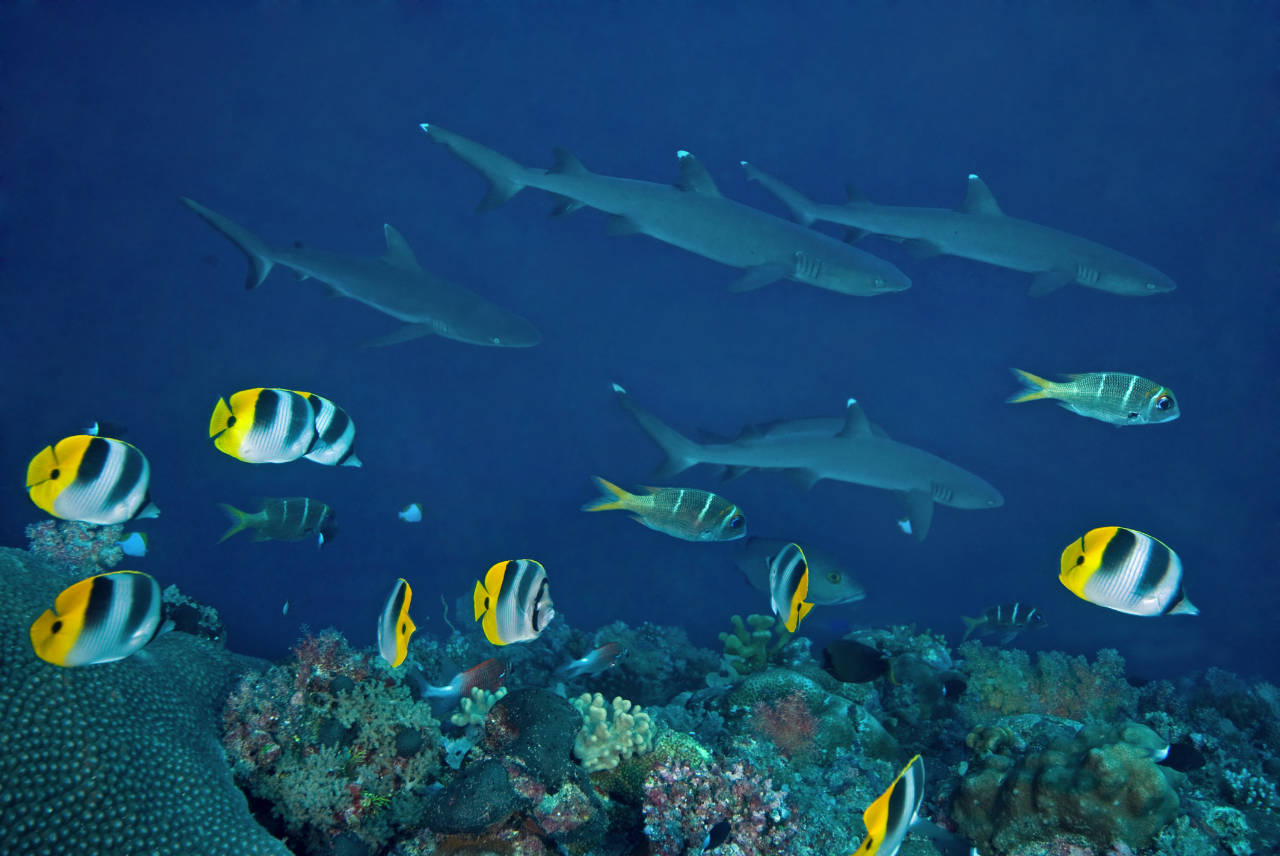 The tides and currents around the world depend on the phase and position of the moon. Tides are at their highest and lowest points during full and new moon. In Palau the maximum tolerance between the tides is roughly 7 feet (2 meters).

1. The Equatorial/Counter Equatorial currents control the flow of water across the western pacific that governs the tidal action that affects Palau.

2. The lagoon: The island complex is surrounded by a barrier reef. There are only a few channels that allow for the flow of water in and out of the lagoon during the tidal changes. For nearly 6 hours the outgoing tide will flow continuously out of the lagoon taking sediment and debris out to sea. When the moon completes a quarter orbit around the earth the tidal flow will shift. For the next 6 hours incoming tidal water will rush into the lagoon bringing in clear water from the open ocean.

The tides move forward approximately one hour every day, a 12:00PM high tide will be a 1:00 PM high tide the next day. During the outgoing tide visibility (as a rule) in the lagoon will decrease, due to the fact that the outgoing tide carries away sand and particles to the open sea through the channels in the barrier reef. During the incoming tide, clear water coming from the open ocean brings increased visibility along the reefs, channels, and inside the lagoon. The current that runs along the western reefs of Palau turn at Blue Corner, hits the reef wall, flowing up and over the plateau bringing with it an abundance of clean water, plankton, and algae.

This phenomenon occasionally creates very strong currents. As a rule of thumb, the incoming tide will flow from south to north and the outgoing tide from north to south. The current at Blue Corner is stronger, shorter, and hardest to predict at the half-moon phase of the lunar month. 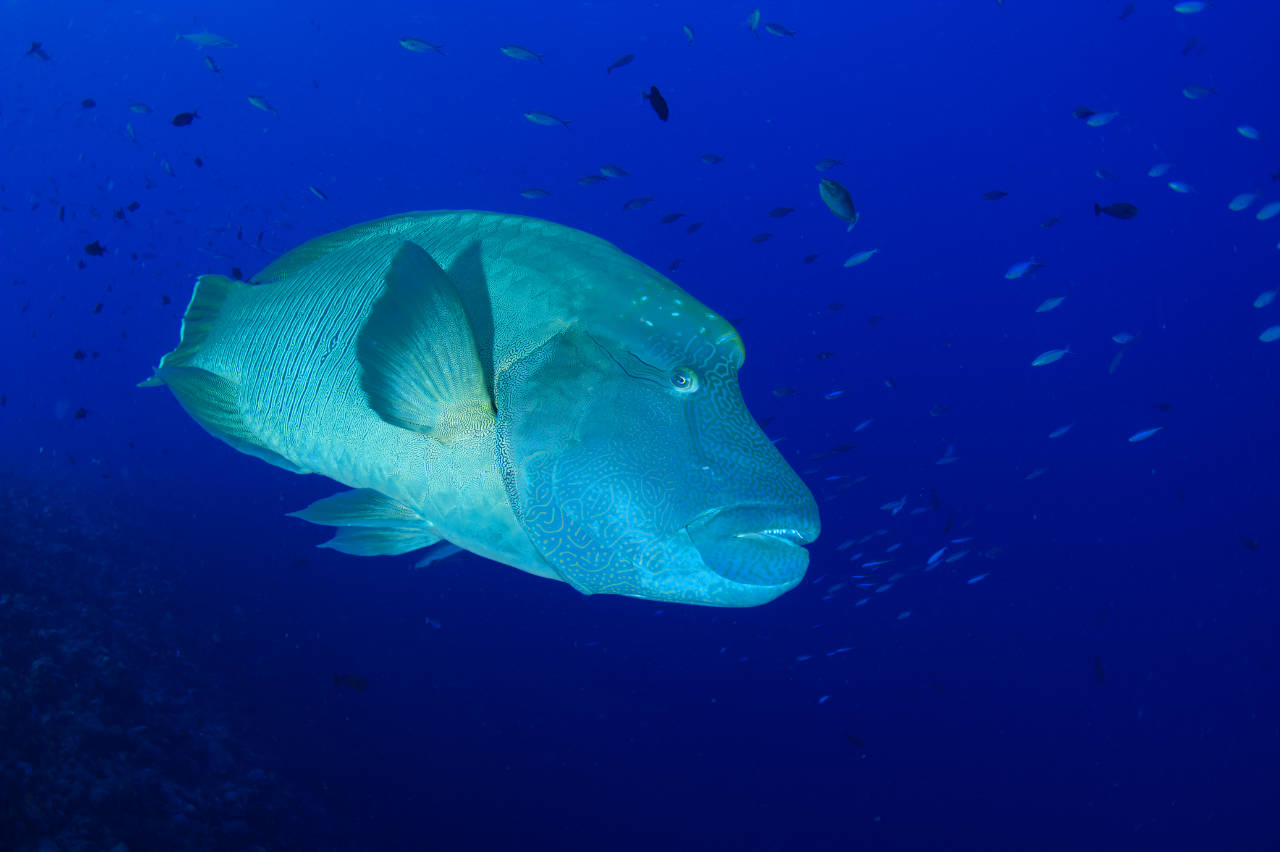 Most dive magazines rate Blue Corner as the single best dive in the world. The formation of the reef, sheer walls, and a large number of schooling fish make it a truly unique experience. There are three mooring buoys located along the reef. The eastern buoy, the central buoy, and the western buoy. You can dive this site from two different directions, depending on the current. Generally, divers will begin the dive while their boat is moored to either the eastern or western buoy. The central buoy is rarely used to start the dive.

A vertical reef wall that runs south to north parallel to Ngemelis Island. The reef then turns toward the open sea and stretches out from East to West, creating a plateau at 45 to 60 feet (15 to 20 meters). Past Blue Corner the reef wall curves again and runs south to north. The wall drops from 30 to 1000 feet (10 to 330meters) or more and is covered with large variety of giant Gorgonian sea fans, hard corals, and soft corals. The Eastern part of the plateau consists of large patches of sand. Massive coral heads and rocks are scattered throughout the sandy patches. The flat coral plateau on the west drops gently from 45 to 60 feet (15 to 20 meters) with colonies of cabbage corals as well as many varieties of hard and soft corals. 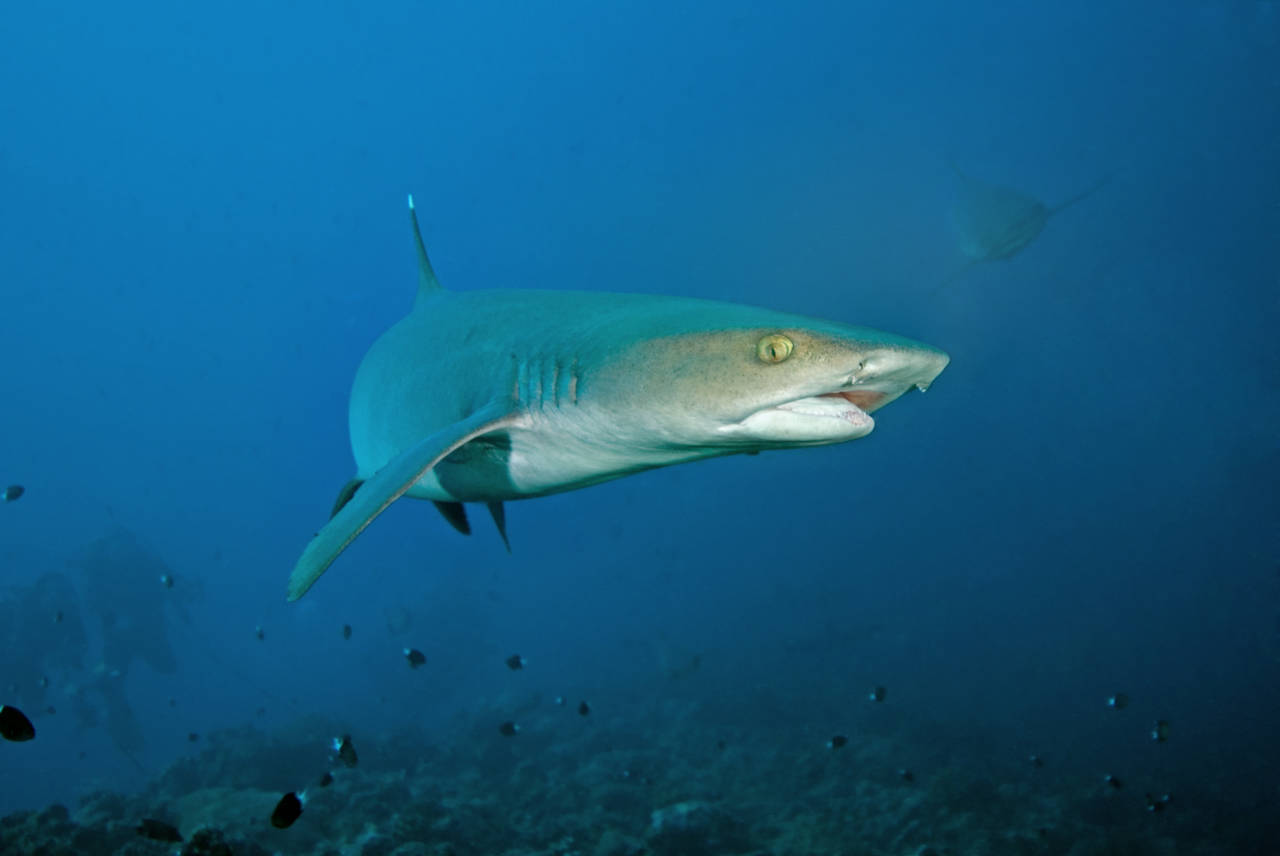 Blue Corner Palau is home to some of the largest schools of fish in the world, here you can see just about every kind of fish found in the tropical ocean. Sharks, Wahoo, Tuna, Hawks Bill and Green turtles, Eagle Rays, Giant Groupers, and Barracuda, to name but a few species. These denizens come in very close, in fact, closer than you can imagine.

You will experience encounters here that you will provide plenty of thrills and excitement as well as great stories to tell friends. Blue Corner is said to offer the utmost photo opportunities in the world. According to the direction of the current, the pelagic fish will switch from one side of the corner to the other. Permanent residents at the Blue corner are large schools of Jacks, Snappers, Chevron barracudas (usually on top of the plateau), Redtooth Triggerfish, Pyramid Butterflyfish, profuse numbers of small tropical fish and Palaus famous Napoleon Wrasse. Occasionally divers spot Great Hammerheads, Whale Sharks, Mantas, Marlin, Sailfish, and whales. 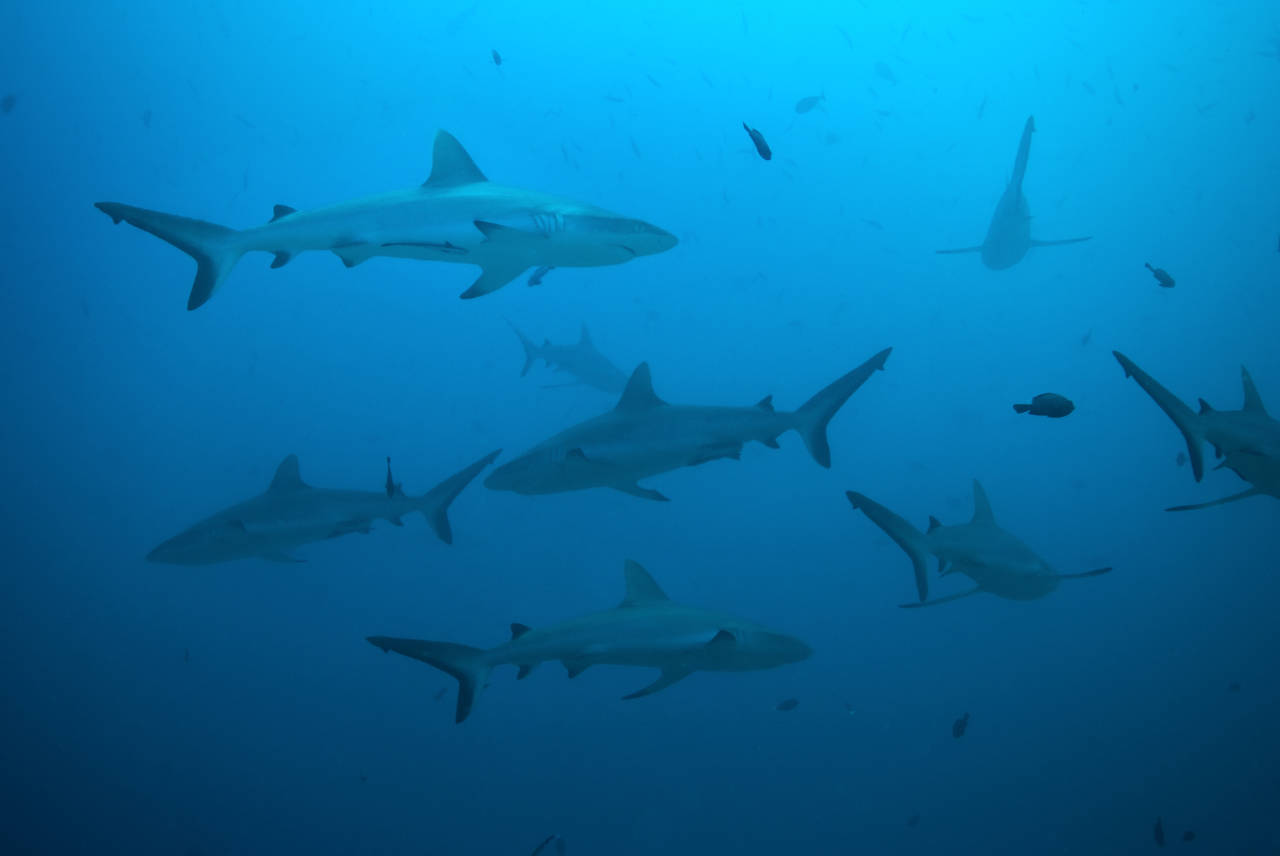 Eastern Buoy - The dive guides usually refer to this as the incoming dive. The dive starts at canyon /cut that leads westward along a reef wall. Look for sleeping White Tip sharks on the sandy bottom of the eastern cut. Swim along the lush soft coral wall for approximately 300 feet (100 meters), you will come to a cavern with giant Gorgonian sea fans, lookup, you will most likely see many gray reef sharks patrolling the reef wall along with big schools of Black Snappers and Big Eyed Jacks. If the current is mild it will carry you further along the wall towards the corner.

If you encounter a strong current, let it lift you to the ledge, at the top, using your reef hook hook-onto one of the rocks or dead corals. Now you are free to face the current and watch the parade of sharks and fish. You can move sideways (westward) by changing positions along the ledge all the way to the corner. When your bottom time is over, unhook yourself and drift along with the current, it will take you to the top of the plateau. On the plateau, you will find more swirling schools of barracuda, snappers, wrasses, triggerfish, etc. The current will diminish as you drift westward. While you are finishing your dive, with a safety stop, you will have a panoramic view of the action on the Corner and the plateau.

Center Buoy - The center buoy is located above the cavern. It is not recommended to start the dive here during strong currents, as you will find it difficult to reach the top of the plateau.

Western Buoy - A dive that begins here is called the Out-Going dive. The wall starts at the Blue Hole and curves around south to the Blue Corner. The formation of the reef wall on this side is steeper and plunges beyond a diving depth into the sea. Keep a watch on your depth gauge, it is easy to drift down as you are caught up in the spectacle of action along the reef and out to sea. Look for large schools of yellow and white Pyramid Butterflyfish, Moorish Idols, and Redtooth Triggerfish. 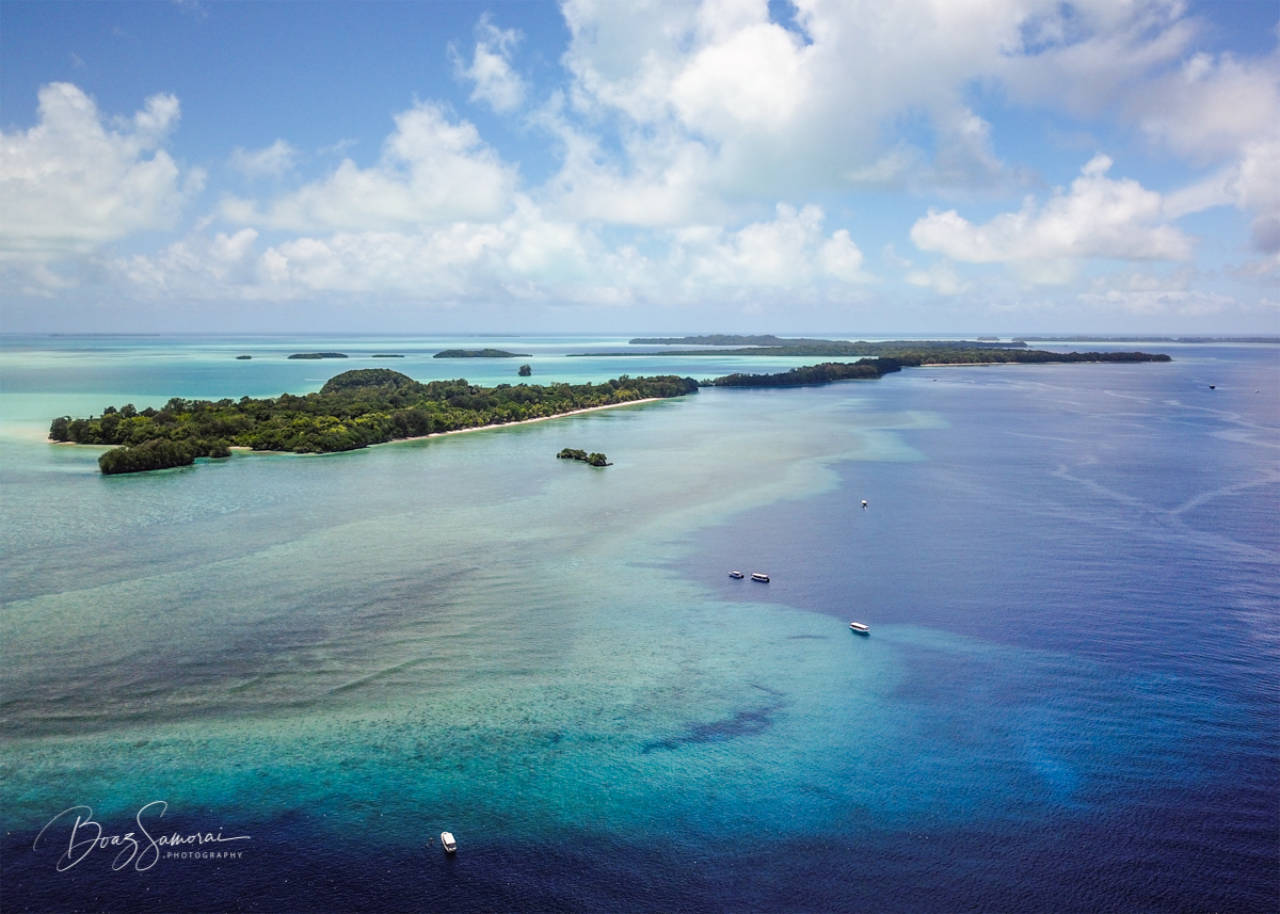 The top of the reef is 10 to15 feet (3 to 5 meters). As you get closer to the Blue Corner the reef wall begins to gradually slope outward to form the edge of the Corner. On the outgoing tide, if the dive started at the Blue Hole, you will have to kick against the current until you reach the center buoy. From that point, the current will carry you along the reef wall to Blue Corner. As you reach the edge of the reef, have your reef hook ready to hook-on. Once secure and settled, relax, and watch the parade of sharks and schooling fish.

Special features - The Reef Hook is a truly a Palauan invention. The hook was designed to keep your hands free and to prevent damage to the reef while facing strong currents. On one end of the hook is a large metal hook; on the other end is a safety clip that attaches to your BCD, with a 6-foot (2 meters) length of cord. If you are a photographer a reef hook is a must! It is highly recommended you use the reef hook any time you want to stop and the current is blowing you off your focus. Reef hooks are available at all dive shops in Palau. The Safety Sausage is an inflatable red cylinder of flexible plastic cloth that is used to mark your position on the surface. They come in many sizes and styles. The sausage is a very effective and inexpensive safety device. Use of the sausage is advised when surfacing in high boat traffic areas when separated from your dive group and during rough weather. If you do not have one, a Safety Sausage is available at the Fish 'n Fins Dive Boutique. 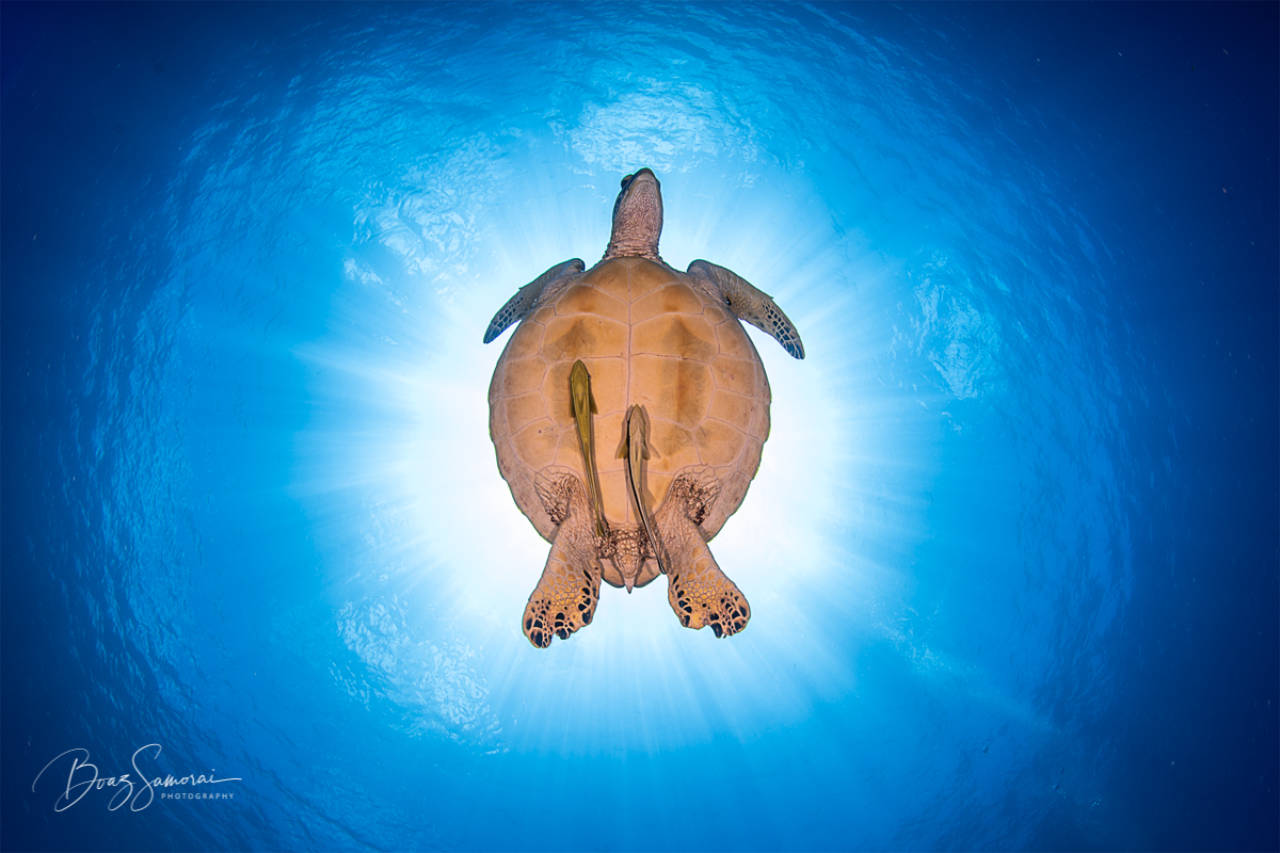 Most people believe Blue Corner acquired its name from the deep beautiful blue open ocean as seen at the Corner. The truth is, however, more interesting. Years ago the dive guides, though very familiar with the dive site at the Blue Holes, would exit the holes and continue the dive off to the right.

One day Francis Toribiong, known as Mr. Dive Palau and founder of Fish 'n Fins the pioneer dive shop in Palau, decided to go along the reef to the left. He could not believe his eyes, hundreds, maybe even thousands of fish of every color, size, and description! Francis discovered Blue Corner purely by chance. In describing how to get to the dive site, Francis told the other dive guides, Go to the Blue Holes, and then go to the left until you come to the corner. That is how this unique and beautiful dive site became known as the Blue Corner.

- To learn more about tides in general visit this link